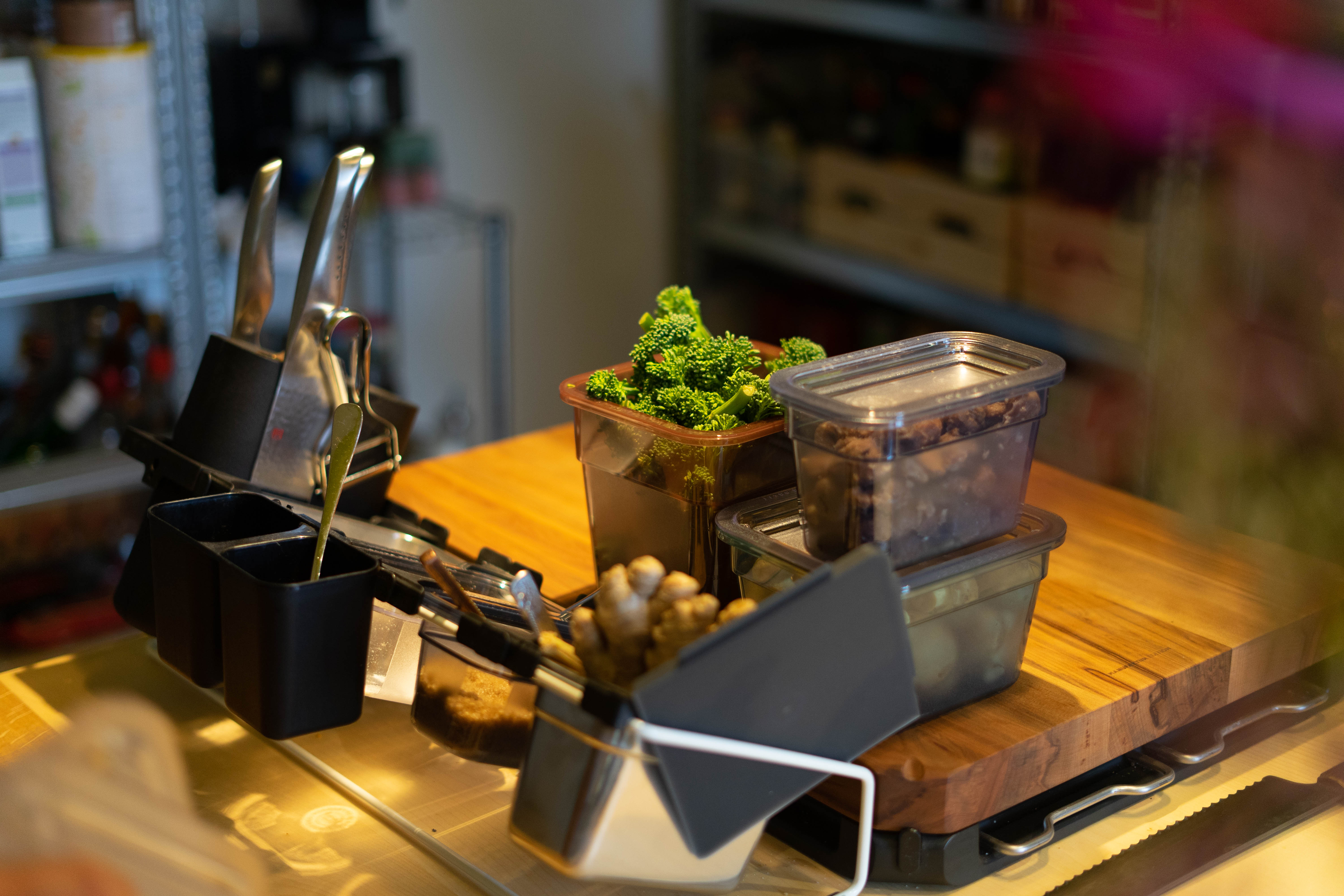 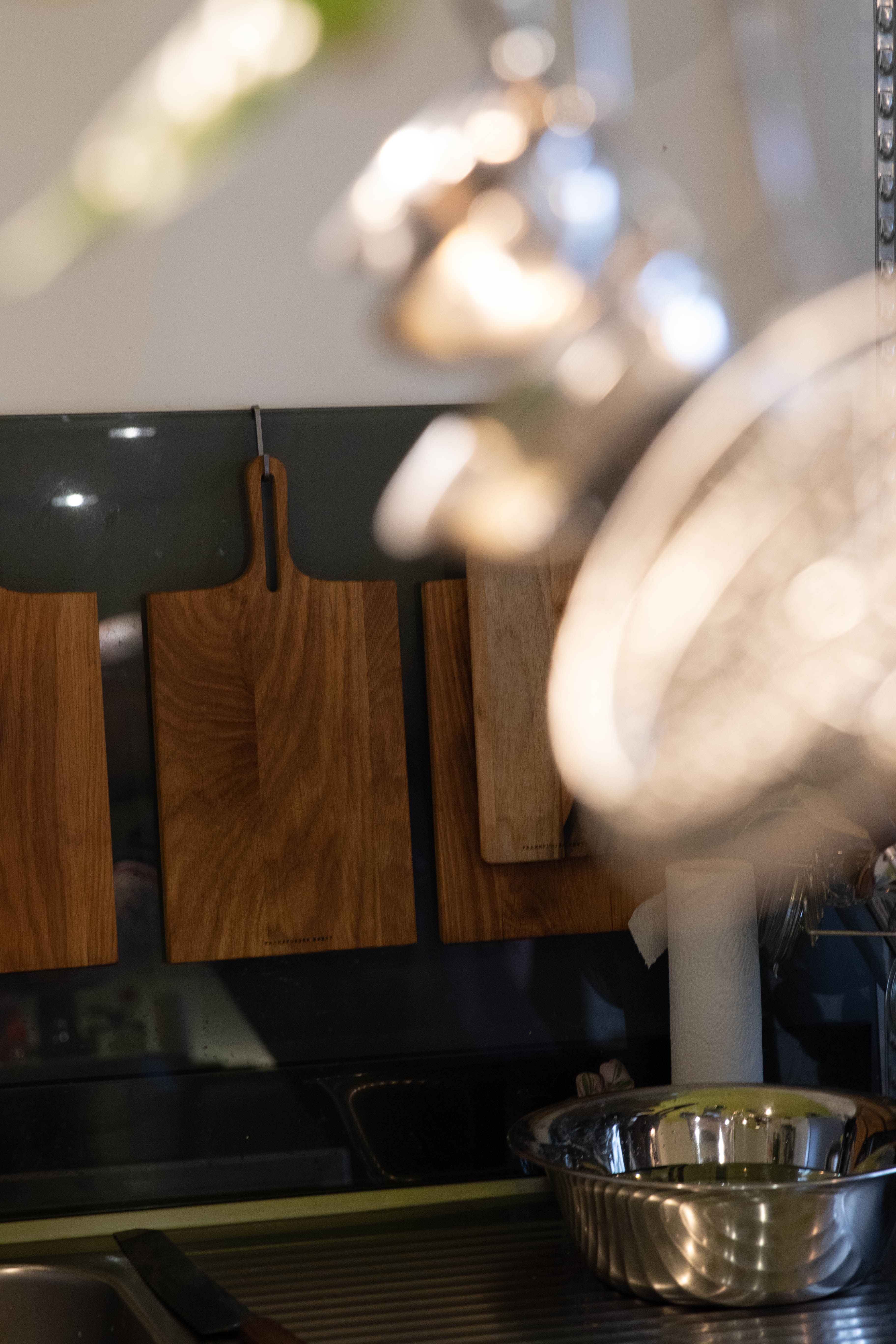 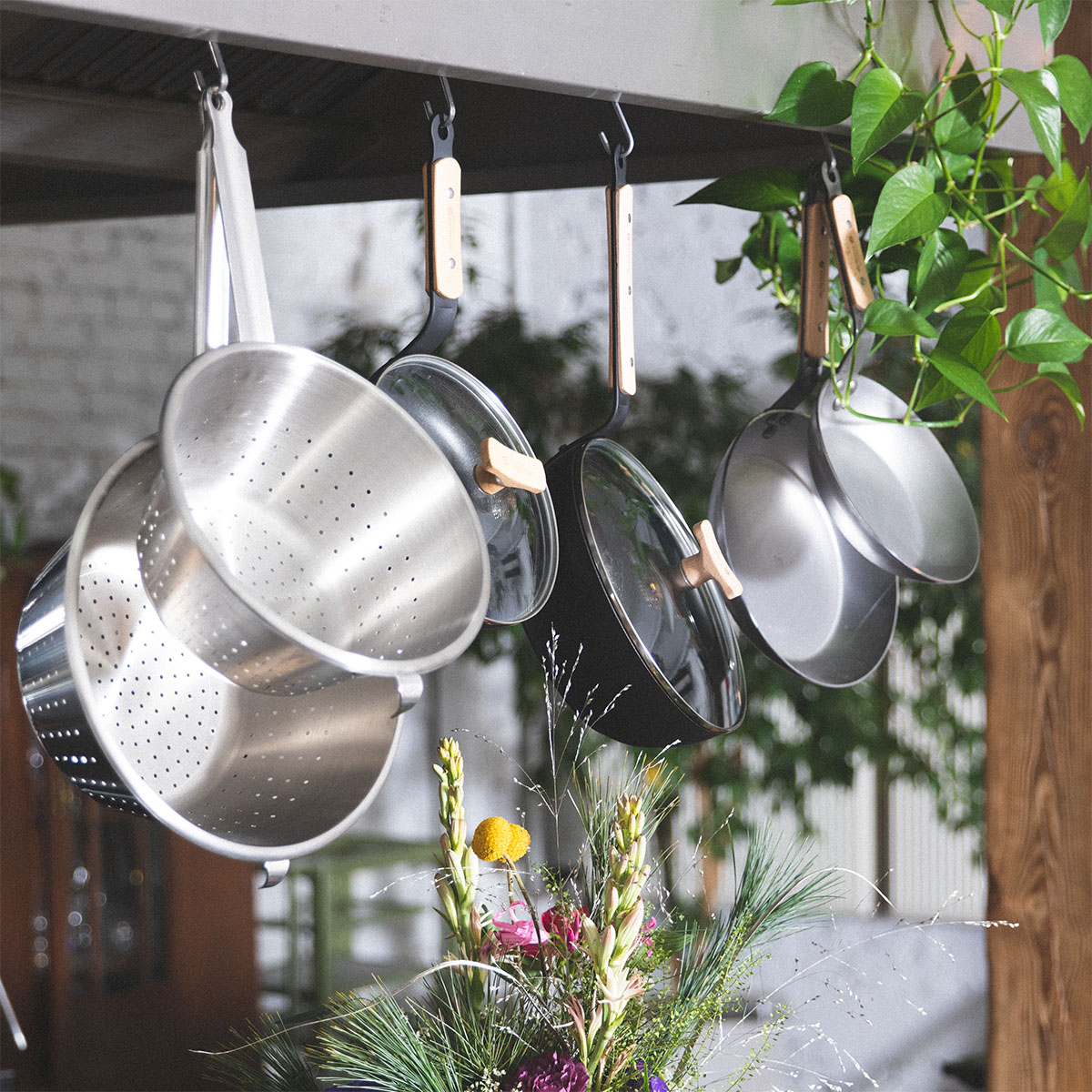 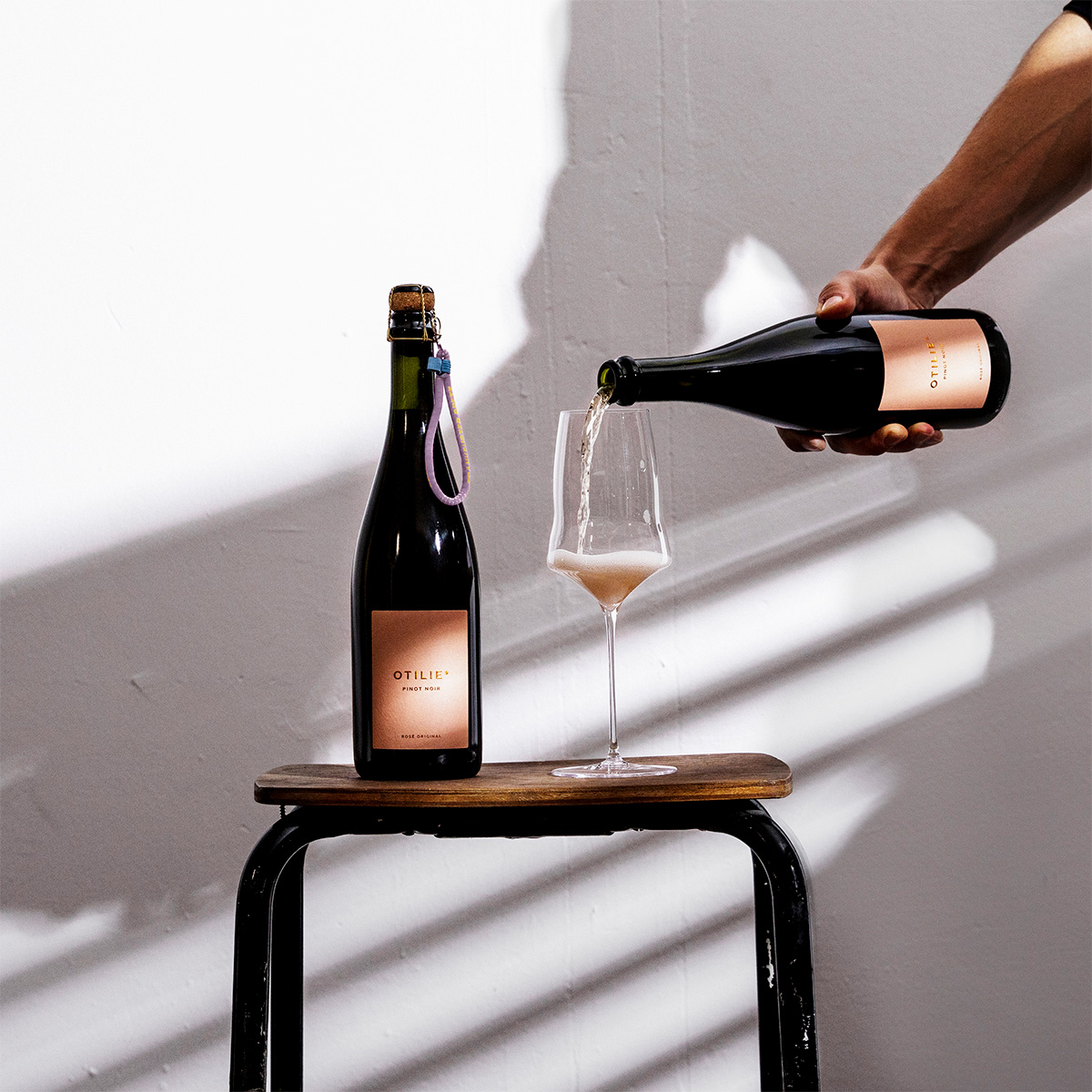 „The way it looks on your chopping board, that's what it looks like in your head.“ (Stevan Paul)

In more than 5 years of working with the Frankfurter Brett, we have hardly encountered any concerns as frequently as the question of ergonomics:

How does it feel with this battery of containers between you and the actual cutting board and whether you don't have the most horrible back pain within minutes after being bent over from standing there?

Since Johannes always took the board with him to work in the restaurant kitchen to test it from the very beginning, the answer was always from the top of our heads:"No, not at all", because even after a tough 16-hour shift there was no more back pain than usual.

Nevertheless, we think the question is justified, so we have worked on the subject theoretically in order to have a solid answer at hand whenever we encounter this question.

For this answer, we first examined the processes on a conventional cutting board.

We have identified work zones, working directions and problems.

Then we did the same thing with the Frankfurter Brett and compared our results.

The result is simple and quite plausible – here is our theory of work zones:

THE CUTTING BOARD & WORK ZONES 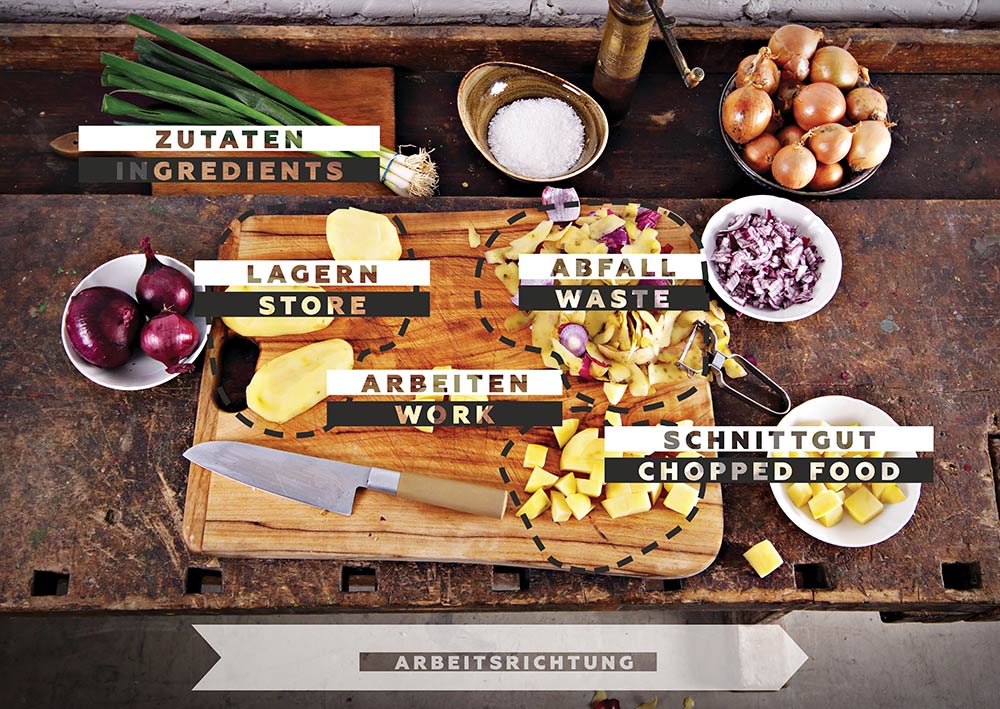 A) On a normal chopping board, structured (right-handed) people work fairly centred in the middle and store the food that they are not working on, on the left-hand side, while on the right-hand side the cut food is more likely to be stored.

This is due to the fact that you always hold the food with your left hand and push it to the right after cutting with the knife blade.

Thus, one has a working direction running from left to right, while the working center is centred in the middle of the board.

The area A (the space between the chef and the work area) is almost completely unused, because otherwise cuttings or waste will fall off the board.

The rear half of the workstation is divided into a working area, a storage area for cut material still to be processed, processed cuttings and waste. Salt, spices and small ingredients are draped freely on the worktop in alternating divisions.

We are all aware of any problems that may arise with this setup:

Mixing of cuttings and waste due to no clean separation of the storage zones,

a time-consuming and cumbersome transport by hand to a pan or other container and a frequently overloaded working area.

THE NEW WAY OF COOKING: INTUITIVE STRUCTURE AND ORDER

The layout of the work zones at a Frankfurt board is quite different:

While the working zones remain basically the same, the way in which the zones are distributed in the available workspace changes fundamentally. The chef is of course a little further away from the board, which causes the working area to move to the previously unused area (A).

The cuttings (A) and waste (C) are given dedicated zones at the front in the form of containers – the storage area (D) now extends over the entire rear half, followed by a fixed dedicated zone (E) for salt, spices & small ingredients in the display bracket.

BACK TO THE TOPIC - THE FRANKFURT BOARD & ERGONOMICS 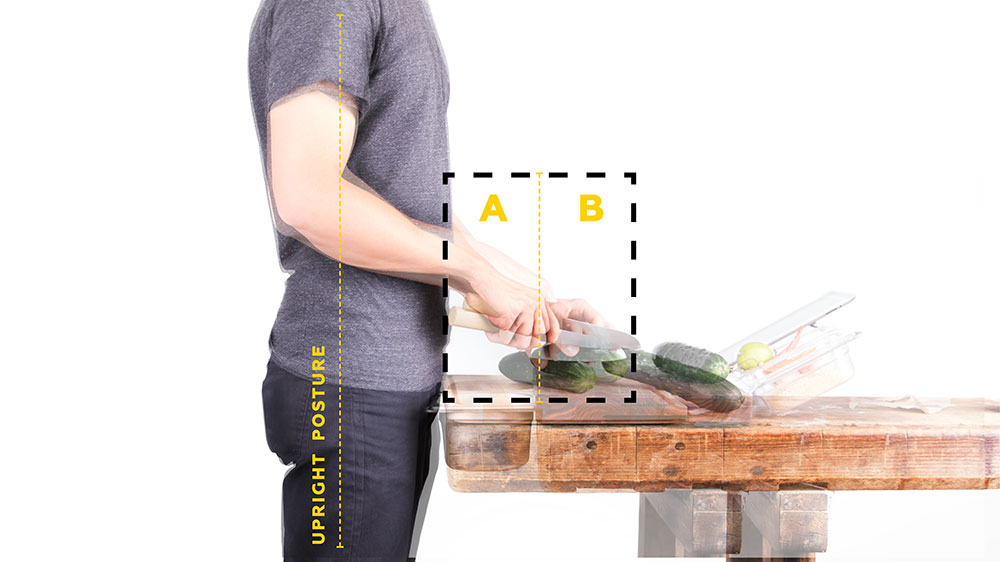 If you position both pictures exactly on top of each other, it becomes clear that the posture is completely identical and does not change at all when working with the Frankfurter Brett.

The actual innovation in the way of working with the Frankfurter Brett is the use of the previously unused zone (A) between the kitchen and the working area for the storage of waste & cuttings – an area which until now has probably only remained largely unused due to the immediate proximity to the edge of the board (and thus to the kitchen floor).

This reallocation of the work zones creates space – on the cutting board itself – by effectively equalizing the usually fatally overlapping work zones.

And it ensures more tidiness – the resulting waste is immediately separated from the cut material and stored safely in its own container. The cut material is also handled in the same way, so that the work surface remains clean and tidy at all times, without any additional effort.

The container system blends almost imperceptibly into existing work processes and feels so natural in use that it is actually easier to integrate it into the work processes than not to use it. 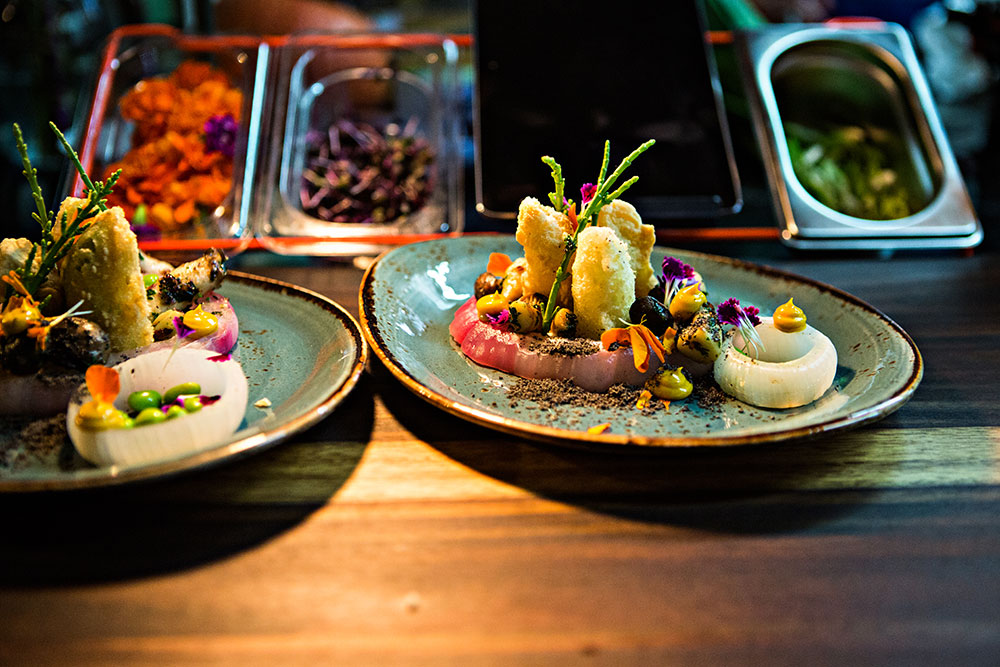 This claim is, of course, somewhat bold and deliberately provocative – but in principle:

The less energy one has to put into the logistical processes, the more energy and love can be invested in the overall experience of "eating" – i. e. tasting, serving, serving and the relaxed entertainment of the guests - which should lead to better results on the table & plates and memorable evenings.

So even if there is only 5% truth in this claim – can you expect more from a kitchen tool?